Hello Marcus,
Thank you for your response, but we are in disagreement with this issue. The token contract has everything to do with the loss of my tokens, because the smart contract address is listed on the API3 site, as an official contract for the organization. So, someone from your organization had to create it, and knows what’s going on with it. Unless, your organization allows just anyone to post smart contract addresses to your site. I agree I erroneously sent my tokens to the wrong contract, but that does not mean that they are lost. That would go against the very idea of the blockchain concept. If the basis of the blockchain is to be a “public ledger”, then that would mean there is a record of where the coins are at this moment. I think it best for you to disabuse yourself of the idea, that I am just a layperson using “Etherscan” to figure out what happened in this situation. I am certified as a Cryptocurrency Investigator, and am not using “Etherscan”. I am using a blockchain forensic tool used by the Government and law enforcement agencies to track down financial criminal activity on blockchains.

I find it disheartening, the lack of effort that you have put into helping resolve this issue. When I first mentioned the problem to you. You quickly responded with a generic brush off answer “if you manually sent your tokens to that contract, they are gone. Please never send tokens manually to any of the API3 contracts, instead use the dashboard to deposit your tokens if you would like to stake.”. Which is NOT really true, is it? As the tokens were “Never” lost , just sent to the wrong address. Later, after further discussion you stated that “As for your previous inquiry that I addressed in April: You have sent your tokens to the API3 DAO governance contract (0x6dd655f10d4b9E242aE186D9050B68F725c76d76). There is nothing we can do about your lost tokens, unfortunately. I think the reason for that is that this address does not have a withdraw function, so any tokens sent to this address can’t be revived.”. Then in a later correspondence you sent a contradictory response stating the funds “HAD” been withdrawn. “If you look at Etherscan, you can see that you have sent your API3 tokens directly to this wallet. The problem lies on your side. Only you are able to figure out why you sent your tokens to this address, and whom it belongs to. It’s worth to mention that the tokens have been withdrawn from this wallet just minutes after the deposit, so it seems like their arrival was expected.”. Which brings us back to my initial inquiries.

At this point, I have lost confidence in your ability to assist me, and do not wish to discuss this matter with you further… If there is no one else at your organization that can provide the assistance I am requesting. That is fine. I will locate the coins under my own efforts, and will discuss my experience with Messari and a few other crypto news agencies, to have them advise the general public of scenarios like this.

Have a Great Day,

Please read my response again because you still don’t understand the situation and falsely assume that there are contradictions on my end.

You sent tokens directly to a wallet that you don’t have access to. I have stated that tokens have been withdrawn from this wallet shortly after you sent your tokens to it. This is clearly shown on Etherscan. If we had the power to restore your tokens from a wallet that neither we or you have access to, then the whole idea of Blockchain would be meaningless. You are basically expecting that we are solving a problem that you caused by carelessly sending tokens to the wrong address in two cases.

The token contract doesn’t randomly send tokens to any address like you claim. If you send API3 tokens to another wallet, you are calling the transfer function of the contract and the tokens are sent from your wallet to the destination wallet you provided. This is what’s shown on Etherscan. You misinterpret it and assume that you sent your tokens to the contract, this is false.

As for your first inquiry, you have sent tokens to the API3 DAO governance contract. It is not possible to restore your tokens from this contract, and we had numerous cases where community members did this mistake in an attempt to stake their tokens.

Please refrain from opening new tickets unless you have an issue that hasn’t been addressed yet.

following your discussion here i’m gonna lay out what i can find given the information that you have provided. This inquiry seems to be beginning with somebody (i presume you) withdrawing ~312.5 API3 from Coinbase to the address “0xee0b0011fbb4e567e65c6ee131282db62912785f” market as “JDub’ account” in your diagram. 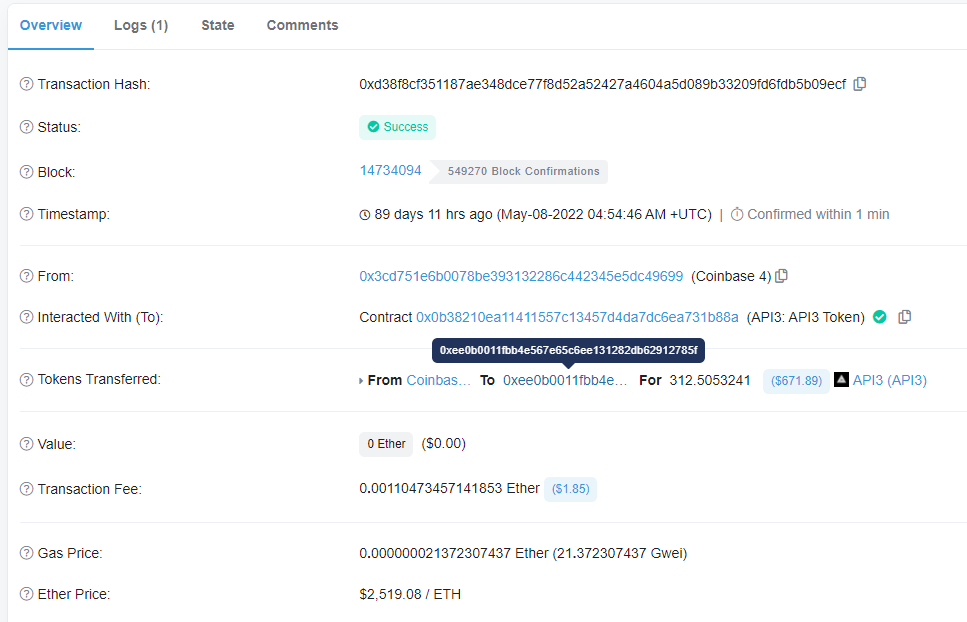 You also see this flow in the intial diagram that you posted:

Each “transfer” function automatically calls the underlying API3 erc20 smart contract (0x0b38210ea11411557c13457D4dA7dC6ea731B88a). This does not mean that this smart contract initated the transfer of funds. The account labelled as “JDub’ Account” used this contract (by calling the transfer function) to send funds to “0xb0f7bfd11bacd0df08c0ba782b3ec9e4f19aa2a7”.

If “0xb0f7bfd11bacd0df08c0ba782b3ec9e4f19aa2a7” is not a wallet under your control, you have send your tokens to somebody else and we do not have the control to “give you back the tokens”.

Similarly, if you send your tokens to the token contract “0x0b38210ea11411557c13457D4dA7dC6ea731B88a”, we can’t do anything. Nobody owns that contract, and it is immutable without a withdraw function. Your tokens are irreverably lost if you did that.

The same applies if you send your tokens to the API3 Staking pool (0x6dd655f10d4b9e242ae186d9050b68f725c76d76) via the “transfer” function instead of using the “depositAndStake” function that is used when you interact with our DAO Staking Dashboard. If you have manually send your tokens to the staking contract, we cannot withdraw/recover them for you. They are irreversibly gone.

Hope this helps and i have to underline what Marcus laid out above.