Hello Ugur,
Thank you for your response. The initial withdrawal of API3 tokens from Coinbase, was me purchasing them, to deposit into the API3 staking pool. The investigation you have provided, confirms what I have been stating. (So to summerize:

Thank you for your time,

No. You send these tokens to another address by simply calling a standard “tranfer” function of an ERC-20 token. It was initiated from your address with the parameters as you can see in the picture. Nobody else can initiate this transfer for you. It was signed and executed by your address. 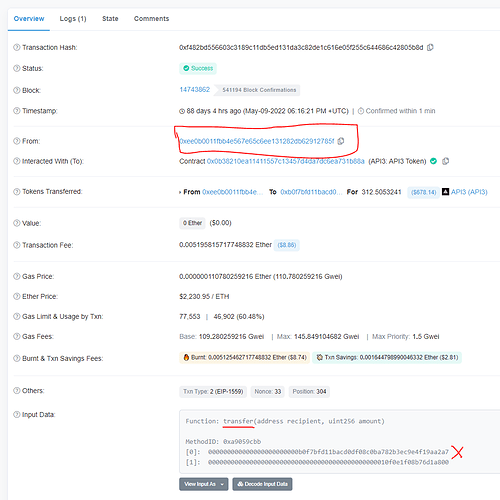 If this wallet isn’t you, then you send some “rando” your tokens, and that person continued to send them to coinbase. we have no influence over what coinbase does and what the person you send your tokens to does.

Again, no. This is not an API3 smart contract. It is quite literally labelled “Coinbase 4” and simply the address on which they hold their customers API3 tokens. This is fully in Coinbases control and we have 0 influence on what they are doing with this.

This point makes absolutely no sense and i’m unsure what you’re trying to tell me. The flow is still that you have send your tokens to a (what appears to be) random address. This person then send them to coinbase (i presume to cash out since they got free tokens from you).

Yes, because again, that address (not smart contract) is Coinbase owned and you obviously have no association to it, since you have not send the tokens there. The person (0xb0f7bfd11bacd0df08c0ba782b3ec9e4f19aa2a7) has done that.

Yes, it is possible to verify the tokens that address labelled as “coinbase 4” holds.

There is no relationship between Coinbase <> API3 in any form. Coinbase independantly decided to list the API3 token on their exchange. We are not receiving any revenue from them nor have any “deals” in place.

The reason we are “unwilling” to return your tokens to you is that we are not in the possession of them, nor know any party, or have juristition of any party being in possession of your tokens. You have sent your API3 tokens to a random address, and that person deposited them on coinbase. How are we supposed to help you here or even compensate you for your own mistake?

Again, there is no relationship between Coinbase <> API3 in any form. We have no influence over their decision to list the API3 token, nor can we prevent them from doing so. If your tokens appear to be stolen (or misend by you to a random person), i would take this up with the customer support of coinbase, since this person was so “nice” and deposited them back to coinbase (they should know who it is).

Again, if i could help you, i would. Why would i screw around because of 312.5 API3 tokens? Can we think this through logically for one second? You appear to be misuderstanding what exactly occuring and somehow are under the perception that we’re trying to scam you out of ~600$ worth of tokens. We are not in control of your tokens. We have no relationship to coinbase. We can’t control a random address you have decided to send your tokens to.

Like i mentioned in this very long post. There is unfortunately nothing API3 can do for you here. You can seek alternative courses of action for resolution, but i will just again underline that you are grossly misunderstanding what happened on-chain. The facts are pretty straight up on-chain.

I really wish i could help you any further here, but what it boils down to is pretty simple.
You’ve send your tokens to a random person. That person send them to coinbase and most likely cashed them out. You can take this up with coinbase, since they will know who “0xb0f7bfd11bacd0df08c0ba782b3ec9e4f19aa2a7” belongs to, but we, as API3 have no ability to help you, or randomly compensate you for something that has nothing to do with us.

All the best,
Ugur