We are excited to announce our second Community Initiative - the API3 Thinkathon 1.0. This week’s contest marks the beginning of a series that is all about exploring new possibilities for the blockchain space.

In order to participate in our initiative, please highlight a theoretical idea for a new project that could use an existing data provider to enable a novel blockchain use case. We accept any type of format for submissions. Whether you illustrate your idea through a video, a blog article or a forum post, all submissions will be considered as long as they meet our content criteria.

The contest lasts from the 18th to 31th October, 4:00pm UTC. After the deadline is reached, the Community Management team will preselect the best submissions and put them up to a vote for 48h. The top three submissions will receive API3 token rewards.

To participate in our Community Initiative, please submit your idea and make sure that it meets our content criteria. After you submitted your idea, please fill in this form. Multiple submissions are allowed.

For questions or general discussions about API3 Community Initiatives, please visit our Discord and use the dedicated channel #initiatives.

Tweeted out a submission, and will copy the text below:

The product would check to ensure a deviation of > a volatility threshold % in the value of the transacted stablecoin hasn’t been surpassed, in the comparative price of a basket of similarly pegged stables, and in forex compared to another “baseline” fiat currency.

This would safeguard against high volatility in the (i) pricing/valuation of the stablecoin being transacted and (ii) the fiat currency to which the stablecoin is pegged. High-demand protections if smart contracts are to be used for high-value and longer-term-locked transactions.

By calling the dAPI interfaces before stablecoin payment, the Forex dAPI & stablecoin price dAPI responses would ensure the stablecoin price and relative fiat price are not a certain amount different (volatility threshold) than the initially agreed price.

The stablecoin could also potentially be compared to $RAI volatility, or the contract could hedge the volatility with derivatives via #API3Alliance members @DeribitExchange’s & @KaikoData’s data. This can address local hyperinflation and stablecoin regulatory/exploit risks. 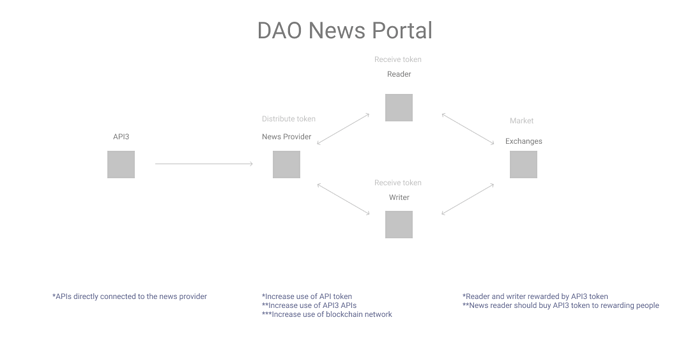 Summary:
The Fantastic 3 is about bringing together different types of creativity towards a shared goal. Blockchain scaling is the future, and the country-based community is a strong advocate of this new technology. Participants at this event will have the opportunity to help shape this new world.

Event:
The Fantastic 3 is an API Innovation Festival run by the community. The goal of this event is to expand the API3 Alliance by utilizing the blockchain-API3 network.

The Fantastic 3 combines a #Thinkathon, #Buildathon, and #Hackathon with workshops, community gatherings, and an innovation festival!

Create an ecosystem made up of multiple and diverse ONGs dedicated to helping immigrants in North, Central and South America (or the entire world). This ecosystem can with the help of the blockchain manage in a transparent and decentralized way the resources and statistics destined to help immigrants and in this way everyone who wishes to donate to the cause can track the organizations which would generate more trust and motivate others to collaborate. At the same time the staff of the ONGs is selected and trained and they are responsible for creating educational programs so that people (immigrants) have the opportunity to learn about web3.0 technology and can create a better life, thus spreading knowledge. The creation of a database in blockchain favors the formation of a platform that selects from among migrants human talent capable of working for API3 or any of its partners. 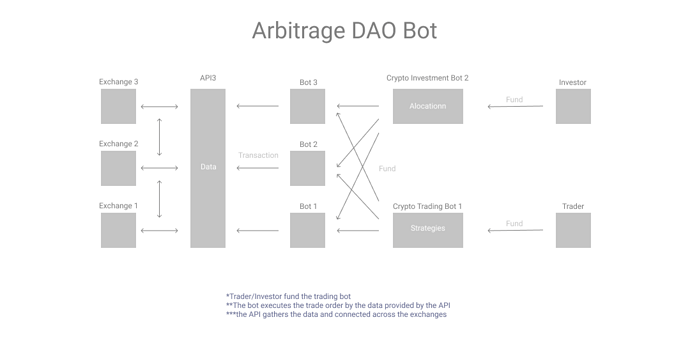 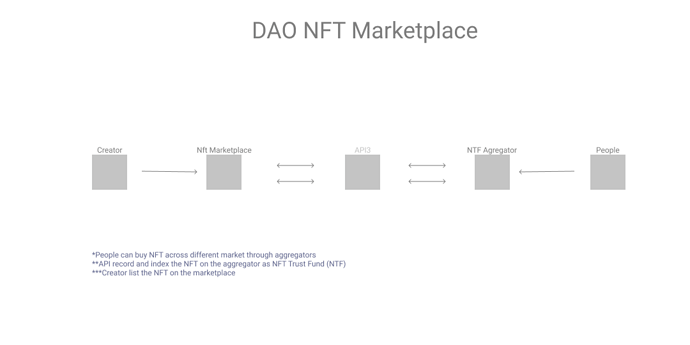 There is a pressing need for accelerated investment in strategies to reduce rising greenhouse gas (GHG) levels due to their strong effect on the global climate. While there are numerous approaches individuals can take to reduce emissions, reaching carbon neutral is difficult. Carbon offset is an approach to compensate for emissions through initiatives such as renewable energy development, GHG capture and/or destruction, and reforestation.

ClimateKuul is an existing API3 data provider with endpoints for calculating the carbon footprint of travel by air and road. This functionality could be incorporated into a dApp that enables individuals to calculate the carbon footprint of their travel activities and, utilizing the verifiable nature of the blockchain, demonstrate a public commitment to offsetting those emissions through cryptocurrency payment to validated carbon offset entities. Growth in users publicly committing to carbon offset could spur new, globally distributed entrants with creative solutions to tackling GHG emissions.

This idea of public commitment to carbon offsets could even be extended to one’s participation in the blockchain itself. While it would require numerous assumptions e.g. the energy source composition of electricity consumed by blockchain miners, it is not unreasonable to envision an API3 data provider calculating the emission cost of blockchain transactions for a given address.

Germany lost World War II due to a lack of sufficient randomness. The Enigma machine used by Nazi Germany to encrypt messages used in the war was cracked by the British Bombe. Given enough time, the machine developed by Alan Turing exploited the Enigma machine’s cryptographic algorithm and cracked the encryption. I blame all of this on the lack of randomness (and hence the predictability) of the enigma machine.

Trying to code (true)randomness into a deterministic system is probably impossible, however, getting as close to it as possible is also absolutely essential. Many anons have similarly faced the issue and abuse of having to play a rigged game in the past couple of months. I’m talking about generative art NFTs of course. The vast majority of generative art NFT projects that I have tried to mint faced significant challenges in terms of being able to retain fairness/randomness around the minting process. We often see people attacking the non-randomness of a lot of these generative processes with bots and algorithms and compromising the fairness of the distribution process. You might want to say that it doesn’t really matter, who cares what piece of art you happen to generate and if someone else can game the system, right? However, at the same time, you can’t deny the importance of random numbers in creating truly fair distribution models, and yes you might want to write off that importance for some random (pun intended) NFT project, however, the importance of NFTs, their use cases and the narrative around their utility/value is increasingly undeniable.
The ‘metaverse’ is just one of those increasingly undeniable narratives/utilities. On-chain multiplayer games with Battle Royale modes (Floor loot RNG etc.) and on-chain MMORPGs (quest rewards RNG) are coming, they’ll need increasingly better and secure RNG sources. Not to mention all of the chance related games. You can even add non-NFT related implementations like chance-based games (fair lucky draws, lotteries, Russian roulette-style games etc.) and even dApps like tornado.cash to add privacy/security layers on transaction paths etc.

There are many RNG APIs available off-chain, I would like to see a dAPI implementation that combines 5 or more of them to create an on-chain RNG API source. I’m not technically proficient, but my inept understanding would be, adding a few layers of calculative processes (multiplying/dividing/squaring) and some random sequencing among the off-chain RNG APIs, or something along those lines. I suggested a suite of these dAPIs, tailored for different use-cases and priced respectively, so the more complex it is, the more it can (and should) cost, but also simpler/cheaper solutions for simpler/cheaper use-cases.
(I know VRF exists. I just think dAPIs are plausibly better solutions, add the insurance aspect on top and mind-blown)

Hello Everyone!
Quick submission on this subject guys.

Expanding a bit on the whole ecosystem idea and potential future implementations, guidelines specify theoretical ideas using the API3 protocol and existing data providers; but ever since hearing about API3 and Airnode, I´ve had my target set on expanding the data providers ecosystem to data generators who are unaware they could be providing data to other projects or initiatives, through the blockchain, not necessarily on-chain smart contract applications only.

For example, through Airnode and API3 implementations, academia and research could benefit from useful, remotely generated, realtime sensor data, which could be monetized more easily and made more accessible to other researchers, for example, publishing papers on subjects such as changing climate patterns around the globe.

All this enabled thanks to easily deployable, maintenance-less Airnode nodes, monetized and insured through the API3 protocol, potentially governed under their own research applications specific sub-DAO.

The submissions for the API3 Thinkathon are closed. Thank you for your contributions. The Community Management team will now work on selecting the best submissions to put them up for a vote by the community.

The poll will take place in this forum topic and will last from the 2nd to 4th November, 6:00pm UTC. After the vote ends, the top three submissions will be rewarded with API3 tokens.

The voting period has begun. The following submissions are up for vote till November 4th, 6:00pm UTC.

Thanks to everyone who participated in the API3 Thinkathon 1.0. We appreciate that you took the time to create hypothetical blockchain use cases. After all, it takes vision to create novelties.

With that said, we are happy to announce the two winners of this contest that were selected by the community - winonap and Jiyad. Congratulations!

Both winners will receive API3 token rewards and their creations will be added to the visions section of the API3 Community Resources.

To those who did not qualify, don’t be discouraged to participate in future Community Initiatives. There are a lot more to come.