I think the highest priority channels should be listed at the top of our Discord. Currently I don’t feel like they are. It’s especially apparent on mobile. Here’s a screenshot on an iPhone.

In my opinion the channels that are most important, from our target user’s perspective, are

Most of these I can’t see in the mobile view unless I scroll down. Some of the channels at the top don’t seem very important to typical users.

If I’m a user or developer I’d like to see the channels I care about at the top and only have to scroll for the less frequently used channels. Thoughts @Marcus & @Auvi ?

Personally, I agree that the channel / category order should be changed according to our priorities. I would go one step further and say that we have too many channels that are redundant.

As @Auvi set the Discord up, I’d like to know her thoughts on this as well before I change anything. I wonder if she had a particular reason why she created this particular order. From experience, I know that a lot of Discord servers in Blockchain have a setup like ours, with announcements, github, media and even code of conduct being on the top, followed by the actual community channels. However, I think we should not copy what others are doing without having a good reason for it.

I don’t like that each channel has a symbol next to it as it creates distortion. I guess I am the only one with that opinion, though. 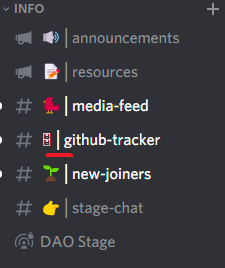 I would personally propose the following setup:


lounge is basically a channel where people can talk about any subjects that are off-topic as long as they are within our server rules.

new-joiners should be added to the private section. This prevents that scammers delete their notifications in this channel, which they often do to avoid getting detected by Admins for their suspicious names (API3 Support, Support Agent etc.).

tasks is a channel where we could list tasks that could be done by the community, such as translations. There is no need for keeping a separate category (contribute) in my opinion.

teams is a temporary channel, dedicated to the API3 Workathon. Therefore, I didn’t include it in the list.

The launchpad (first-steps) has to be updated, it contains old information and a reference to the unofficial API3 price channel which we should not mention on our Discord. Please update it accordingly @Auvi or give me the necessary role / access so I can do it myself. I also suggest to not have an extra category for it. Just have first-steps as the very first channel at the top.

All the other channels are redundant in my opinion. I did not include the private category because it is not visible to the public anyways.

I don’t mind this rearrangement tbh, however I’m not sure it’s strictly necessary for convenience sake - have people explicitly complained about this current layout?

There isn’t much sense in making rearrangements if there isn’t really any issue with the way it is now. The layout I chose is simply for order and aesthetic, it just feels messy to have channels all over the place out of appropriate categories

First steps is not visible to any general user, this is exclusively visible to moderators

Regarding the invisibility of the launchpad, I think we should make it public and perhaps add a basic code of conduct channel that we can refer people to in case they break any of our server rules.

The fact that nobody complained about our current channel setup does not imply that it is good or that there isn’t any room for improvement. As for the launchpad (first-steps), it is enough for now if you will remove the price channel and the channel names that will be deleted with the new setup. This weekend, I will put more thoughts into how we could potentially update it.

If nobody has anything to comment on the proposed setup, I will make the changes accordingly in 24 hours.