The Business Operations Team has the responsibilities below. The scope of the project will vary periodically, and this list represents the current state. Much of the current scope remains similarly aligned with previous cycles, and any new developments are specified within this current proposal. While much of the Operations Team responsibilities are consistent between cycles, there is also an increasing element of process building and defining organizational architecture in new areas as needs arise on an Ad Hoc basis. Any responsibility laid out in this proposal that seems beyond the scope of the Operations vertical should be considered as something newly identified where foundational processes are currently being defined before they are then either passed off to relevant verticals or new verticals become structured and are then open to new team proposals. This essentially serves as a way to fill gaps and set other teams up for success, but most of these processes are built in collaboration with other verticals. Additionally: 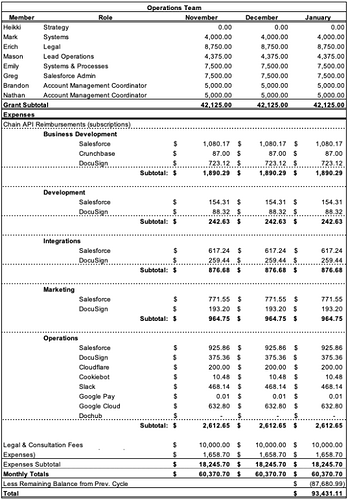 image552×793 133 KB
*The destination for this proposed budget is a multi-sig wallet address managed by Mason, Emily, and Mark via Gnosis Safe.

Moving into Cycle #5, there are a few main changes to operational expenses:

With the changes made to Business Development last cycle, there emerged a critical role which serves as an informational and coordination based node both among API3 verticals and between the Foundation, the API3 Providers, and users of Airnode (Developers, dApps, and Platform end users). Brandon Ray and Nathan Robinette will work under the Operations team as Account Management Coordinators to serve as communication and coordination liaisons between all verticals. They have proven to be a promising addition, but there is still progress to be made in ensuring that this new role best serves the DAO, and much of the foundational aspect of this endeavor is still being worked on extensively. The goal is to develop a framework for Account Managers to apply to any and all new endeavors requiring cross vertical collaboration, and this is still ongoing. More information on this and our overall progress can be found in our new monthly updates posted by Mason here and here.

New changes to Business Development processes have also made certain subscription services obsolete. Hunter.io is one that will be terminated by the beginning of Cycle #5, but there will be additional analysis on the viability of tools such as LinkedIn Sales Navigator and Crunchbase.

In an effort to increase transparency and based on community feedback within the DAO, we have also provided a more detailed breakdown of the subscription services that the Operations team pays for out of this budget.

A variety of cost saving measures have also been implemented, including the choice made by some contributors to reduce or forgo some of our USDC compensation to reduce our overall burn rate. Aside from this we also have been able to reduce our overhead from performing a cost benefit analysis on subscriptions as was previously mentioned. Lastly, incorporating Gnosis Safe has allowed us to make grant payments in bulk which has significantly reduced our gas costs on a monthly basis.

Due to the ever-evolving nature of organizational support as the DAO grows, a 10% overage rate is applied to the Cycle #5 budget to hedge against unforeseen miscellaneous or external legal expenses. Any amounts left over in the end of Cycle #5 will be applied to the following budget cycle. This was decided on in the previous cycle, when unforeseen legal fees caused the team to be at a deficit in the previous budget proposal from costs incurred in Cycle #3. This 10% rate was used to forecast the Cycle #4 budget and led to an overage of approximately $87,000 at the end of the cycle. It is our desire to maintain a more efficiently managed budget and we believe that as we move forward variances of this kind will be further reduced.

Deliverables will revolve around increasing the quality and effectiveness of verticals DAO-wide through continued support while aiding in the reduction of costs and inefficiencies where possible as the DAO evolves. The team at its core believes that it is always better to work efficiently, and so most of our endeavors revolve around reducing costs and increasing the quality of our overall output.

The majority of the team’s work is a regular series of daily operational tasks and management of internal business resources built to facilitate the successful business functions of API3 on a daily/weekly/monthly basis. These relate to the maintenance and operation of critical tools and infrastructure and regulatory compliance requirements such as GDPR, privacy, security etc, granular details most of which are by necessity confidential for legal and operational reasons by request from counterparties.

Additionally, the operations team has been designed to serve as a readily available support vertical to all other API3 DAO teams. This means that the team plays an active role in identifying gaps and strategic initiatives, and then defines and builds the processes and structure needed to adapt to or fix an observed inefficiency or problem. As such, deliverables will revolve around increasing the quality and effectiveness of verticals DAO-wide while aiding in the reduction of costs and inefficiencies as the DAO evolves.

For some reason this proposal was created as Primary and not Secondary. And as far as I understand, primary treasury agent doesn’t have access to USDC currently

Are you referring to how it was posted on the dashboard? I’m not seeing it up in that area.

yes, on the Dashboard under “Active Proposals” this voting has Primary label. I double checked this just to confirm this is not a tracker issue.

Thanks for the call out, that’s a mistake. I’ll look into this further.

Besides the USDC issue @enormous mentioned, a Primary proposal will require >50% of all voting power to pass, which is significantly higher than the >15% required for Secondary proposals: Working with Proposals | Documentation

But otherwise, this seems to cover at least 80% of what operations handles. The remaining 20% being the little fixes and putting out small fires day-to-day.