The Business Operations Team has the responsibilities below. The scope of the project will vary periodically, and this list represents the current state. Additionally, Mason Burkhalter and Heikki Vänttinen are designated as authorized signatories on behalf of the API3 Foundation for such agreements reasonably related to accomplishing the objectives and deliverables set forth in this proposal, until revoked by subsequent DAO resolutions. 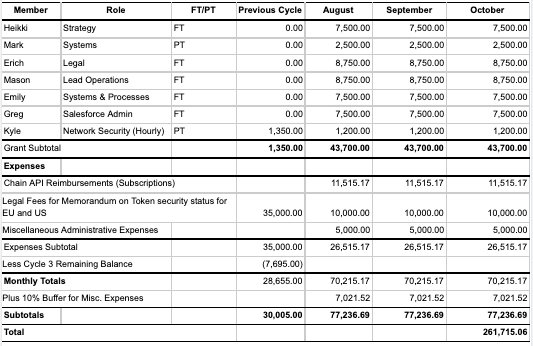 During operations cycle #3 and in addition to other operational expenses like Slack, DocuSign, managed security services, API3 business servers for mail and web, the operations team promoted the BD - API Lead (Mason Burkhalter) to the role of Director of Operations, and has moved Emily for process analysis and Greg for Salesforce administrative management and support.

Moving forward, the operations team will need to cover all operational overheads of the API3 organization, including tools like Slack, Salesforce, DocuSign, API3 business servers for mail and web, managed security services, audits and training, etc. For these expenses, we will combine realized expenses from the previous BD - API cycle that are more appropriately labeled as operational expenses (i.e. Salesforce), as well as to use the previous cycle’s realized Operations expenses as a guideline. Further, the operations team has worked in unison with the BD-API team to develop new verticals and to trim down that team to only relevant personnel. For example, Camron will now be heading API3’s API Integration efforts and has built a team for this purpose that resulted in the movement of himself and Brandon from the BD-API team. The operations team is attaining Mason, Emily, and Greg; and has also incorporated a new part time role filled by Kyle to assist with DNS and network security tasks associated with email server and deliverability issues that have cropped up occasionally. Other personnel movements from the BD-API team include Ugur to Marketing, Gio to the BD Enterprise team, and Jacob G to the BD Platforms and dApps team.

In the previous cycle, the organization purchased a DocuSign plan for the year which will be used across the organization. Additionally, the team was over budget in cycle #3 due to legal fees associated with researching the security status of the API3 token in the EU and US jurisdictions, which is ongoing. Because of the continuing need to purchase new tools or subscription services and due to the ever evolving nature of organizational support needs that will be defined as the DAO grows rapidly, a 10% overage rate was applied to the cycle #4 budget as a means of hedging against any unforeseen miscellaneous or legal expenses that may arise as they have in the previous cycle. Any amounts left over in the end of Cycle #4 will be applied to the following budget cycle.

The majority of the team’s work is a regular series of daily operational tasks and management of internal business resources built to facilitate the successful business functions of API3 on a daily/weekly/monthly basis. These relate to the maintenance and operation of business-critical tools and infrastructure and regulatory compliance requirements such as GDPR, privacy, security etc, granular details most of which are by necessity confidential for legal and operational reasons, as is the case for any commercial organization.

Additionally, the operations team has been designed to serve as a readily available support vertical to all other verticals in the organization. This means that the team plays an active role in identifying gaps and strategic initiatives, and then defines and builds the processes and structure needed to adapt to or fix an observed inefficiency or problem. As such, deliverables will revolve around increasing the quality and effectiveness of verticals organization wide while aiding in the reduction of costs and inefficiencies as the organization evolves.

excited for the upcoming cycle

All good in my book. I’m in favour of it after having witnessed the performance of the team in prior cycles.

Dang dude you are def a lawyer, great catch. Took me a minute to figure out where I went wrong there.

This looks great to me. Let’s go!

This proposal is now live and can be voted on here: https://api3.eth.link/#/governance/secondary-3

I’m interesting in initial ideas re: inter-vertical visibility – something I’ve been wondering myself too

Tons of stuff to do around that. I’d like to create an official role for reporting org-wide

@Mark_Fitzg has been taking that role until now.

I found the cycle 3 deliverables questionable. For example, I can’t think of anything that this team did specifically for the DAO launch.
It’s difficult to demonstrate tangible deliverables for an operations team that will warrant a budget of this size. However, the reason the budget is inflated is that it covers some of the expenses of other teams, which makes it difficult for the voter to assess efficiency. For example, the API BD team needs Salesforce to operate, but it’s not included in their budget and here instead. This makes API BD seem more efficient than it is and the opposite for the operations team.
A solution would be to charge other teams on your services so that you need a smaller budget and can get away with more minimal and accurate deliverables.

interesting and valid points - thanks!

Regarding the DAO Launch, I think the rationale was in supporting those who are less knowledgeable about active participation, and overall assumptions were likely made as to the overall level of support/involvement in the DAO release. If we over-estimated that, we can remove that from deliverables if you think it would be appropriate to do so.

With respect to bloated budget for key infrastructure like Salesforce, I think your idea to charge individual teams makes sense. One main aspect to this tool is that it can actually serve most business related functions as a robust CRM/CMS tool. We tried conveying that this upcoming cycle we’re going to be working on cross vertical processes and visibility into those processes. For example, at a high level we are working on how each vertical would use Salesforce to track the accounts that were initially entered into the system by BDs. When a provider is signed up, then integration and marketing teams are contacting and coordinating with them on our marketing efforts and also getting Airnode integrated. The current plan is to build out these processes, then use them to inform the creation of a new vertical of account management. Because we are building these processes out on the operations side before then distributing the structural and procedural implementations, we didn’t think that leaving the tool on the BD budget made sense, because it’s likely this will require more licenses across numerous verticals.

I think once we have this structured, it would definitely make sense to spread this around by charging verticals for the support of the tool contributed to their verticals. This is also something we could start doing for Docusign and other various tools. Definitely worth considering generally the best approach overall. I think it also is worth mentioning that we are hopeful that we won’t go over budget at all and will have plenty rolling over into the next cycle. Some of the decision around adding a buffer is because of expenses like those that were incurred on the legal side in Cycle 3 that ended up causing the team budget to have a sizeable deficit.

Apologies for a delayed comment. Just sharing a thought, it is perhaps already embedded in the work streams - Competition and market intelligence. I have found that having it as a planned process can be helpful , especially in a the more competitive and rapidly evolving spaces.

Thanks Ashish! Can you elaborate a little here? I’m not sure I’m gathering what you’re suggesting.

Thanks for the quick reply @LikeTheJar . I meant a formalized competitive intelligence process. Generally speaking, i have seen that most projects / companies do some competition tracking, however in most cases it is more reactive or episodic (i.e. when some news / announcements catches attention).

By a formalized process i mean

This has been a long reply. Hopefully i could clarify. Else happy to get on a discussion and i can also share some examples from how i have seen other organizations do it.

Thank you so much for this thoughtful response! I agree with all of these points, and to a large extent we do much of this internally and through coordinated meetings we actually hold on a weekly basis. I think since the industry of oracles is relatively young and hasn’t fully matured, competitor analysis is a bit ambiguous, since we’re all going about solving the same problem in different ways. That said, I’d be happy to discuss this with you in more detail one on one if you think we could add more value to what we’re doing. Feel free to reach out to me at mason@api3.org or via DM and I’ll shoot you a calendar invite so we can chat.

I agree with the need to have each team’s budget be as transparent as possible, and can see the potential problems that having the ops subteam paying for all of the software etc used by other subteams can cause. However, rather than having individual teams pay an amount across verticals to reduce the operations budget (but correspondingly increase theirs), would it not be more efficient to break down the estimated cost of each subscription by subteam, but still have it included in the ops budget, for the next proposal? This would make it more transparent where the ops spend goes without needing the transfers.

Agreed, I was talking strictly about bookkeeping

Yeah I can certainly add a more detailed accounting breakdown in the next proposal. Thanks for the feedback, I’ll be sure to incorporate.